While larger companies are deciding how much of their workforce to send back to the office once the pandemic recedes, an increasing number of tech startups are wondering if they can make do without a lease altogether.

The crash course in remote work over the past year has shown some tech entrepreneurs that their ability to collaborate online is strong—and that they might be better off building their businesses entirely in the cloud. Founders could save money on rent and hire employees wherever they want to live.

Going cloud-only may not be for all companies. Even in the software sector, where the work doesn’t generally involve designing and building tangible objects, there are a host of challenges to dispensing entirely with offices. These range from learning the communication habits of colleagues who never met in person to fostering the kinds of relationships it takes to fundraise from afar. Decades of research point to the power of proximity, augmenting the lore around Silicon Valley, and the birth of the world’s most successful companies.

But some startup founders, like Alan d’Escragnolle, aren’t struggling with trade-offs and are finding the benefits of remote work worth it: He said his team brainstorms just as well remotely and that employee productivity hasn’t suffered.

Notes on the News

The news of the week in context, with Tyler Blint-Welsh.I would also like to receive updates and special offers from Dow Jones and affiliates. I can unsubscribe at any time.I agree to the Privacy Policy and Cookie Notice.SIGN UP

A year ago, Mr. d’Escragnolle was set to join his co-founder at Filmhub, an online film-distribution startup, in Los Angeles to sign an office lease and start hiring. Instead, he ended up renting a ski house in Lake Tahoe, and has been running the company from there since March.

Filmhub now has 15 workers, with teams brainstorming over Zoom, staying in touch on Slack and tracking customers and onboarding new employees with a workspace app called Notion. The company’s most recent hires are based in Ukraine, Portugal, Atlanta and the Dallas area.

“We are saving at least $5,000 a month right now” on salaries and rent, said Mr. d’Escragnolle, 32 years old. Filmhub might eventually have a small office in Los Angeles, he said, “but ultimately we’re not convinced it’s necessary.”

It’s too early to say how many startups will remain fully remote once the pandemic is over, but there’s a consensus that a greater share will be built and grown by teams living and working apart. If they’re able to remain remote, that could have ripple effects on the distribution of talent—and venture-capital funding—around the country.

In early 2020, Kim-Mai Cutler, a partner with Initialized Capital, a venture-capital firm that invests in young companies at their earliest stages, conducted a survey of nearly 100 of its backed founders, asking the most beneficial location to start a company. Nearly 42% said San Francisco, with New York a distant second place. A year later, the leading answer at 42% was no place in particular, or rather, “distributed or remote,” up from 6% the year prior. Only 28% still said San Francisco was the place to be.

In the survey from Initialized, whose investments include Reddit and Instacart, more than a third of respondents said they’d keep their fully remote or decentralized office model post-pandemic. Previously, only 18% said their company location was fully decentralized.

“The pandemic definitely is going to reset this at a higher baseline,” said Ms. Cutler. “How much higher that baseline is, I don’t know.”

Steve Case, the co-founder of America Online, created the venture firm Revolution in 2005 to invest in startups outside the major tech hubs. Among the 150 companies backed by its Rise of the Rest Seed Fund, at least seven that went remote during the pandemic have already decided to stay fully remote for the foreseeable future. Twenty more plan to keep an office but make working remotely a permanent option for employees. Others are still in the process of deciding.

Mr. Case said the combination of the pandemic and the availability of publicly available software tools means that while Silicon Valley will still receive the lion’s share of investment, there will be changes in the distribution of talent and funding.

“Now you can potentially be in any city,” he said. “You had to be in an office, maybe potentially you can be fully remote or hybrid.”

Venture-capital investors said that whether remote-only makes sense depends on a variety of factors: How experienced is the team? What stage is the startup in? What kind of product are they building? Where is the founder’s network based?

Ryan Reede, 27, is part of a four-person startup called Teleportal developing an augmented-reality moviemaking tool. Mr. Reede had planned to move into a house in Los Angeles with the company founder, Thomas Suarez, so the two could work at all hours without renting office space. Over the summer, Mr. Suarez decided to move to Atlanta instead, so Mr. Reede took advantage of falling rents and moved to San Francisco.

“I think having a distributed workforce and having a remote-first culture will pay dividends,” said Mr. Reede. “Remote-first is very cheap.”

Mr. Reede used to work at the DreamWorks Animation campus in Glendale, Calif., with koi ponds and broad corridors meant to encourage colleagues to bump into one another and, ideally, boost creativity. When he and Mr. Suarez started out, they worked out of Mr. Suarez’s parents’ house, whiteboarding in his childhood bedroom. They could confer on coding problems or any number of other things without having to fire up Zoom. “Those microinteractions matter,” said Mr. Reede.

Now with a remote team, he’s learned the importance of overcommunicating. “In the mornings at standups, talk about what you’re going to work on, repeat it on Slack, get it done, then communicate it back to the channel that the task is complete,” he said.

He worries about how well that will scale, and how long he can screencast with colleagues and investors. Still, the Teleportal founders plan to stay remote as long as they can effectively run the company that way.

Christina Cacioppo, founder of the San Francisco-based enterprise cybersecurity and compliance software startup Vanta Inc., said when she started her company three years ago, she thought she’d need several thousand employees before having satellite offices or a meaningful number of remote workers.

“You want to push that off as long as possible because there’s so much value to people being in the same room, talking through problems, ambient chatter, all of that,” Ms. Cacioppo said. “Covid didn’t care about any of those words.”

Ms. Cacioppo, 34, has grown her company from 17 people to 55 over the past year. Some recent recruits are from Indianapolis, Tucson, Ariz., and Western Massachusetts. She’s been able to find people with more work experience than she would have expected to get with the salaries she was prepared to pay Bay Area employees. She’s also found that onboarding remotely is in some ways better: Since newcomers can’t just shadow seasoned team members, the company had to develop a more rigorous training program.

The staff has stayed connected through Zoom meetings and by using a virtual office platform called Gather, where colleagues can have lunch, bump into one another and give presentations.

But Ms. Cacioppo found working remotely led to miscommunications with a member of her sales team, who moved to L.A. in July. When an investor advised her to follow suit and go live there for a short time, she first thought “that’s crazy”—then realized it was “actually quite smart.” The pair met at an Airbnb five days a week for two weeks. 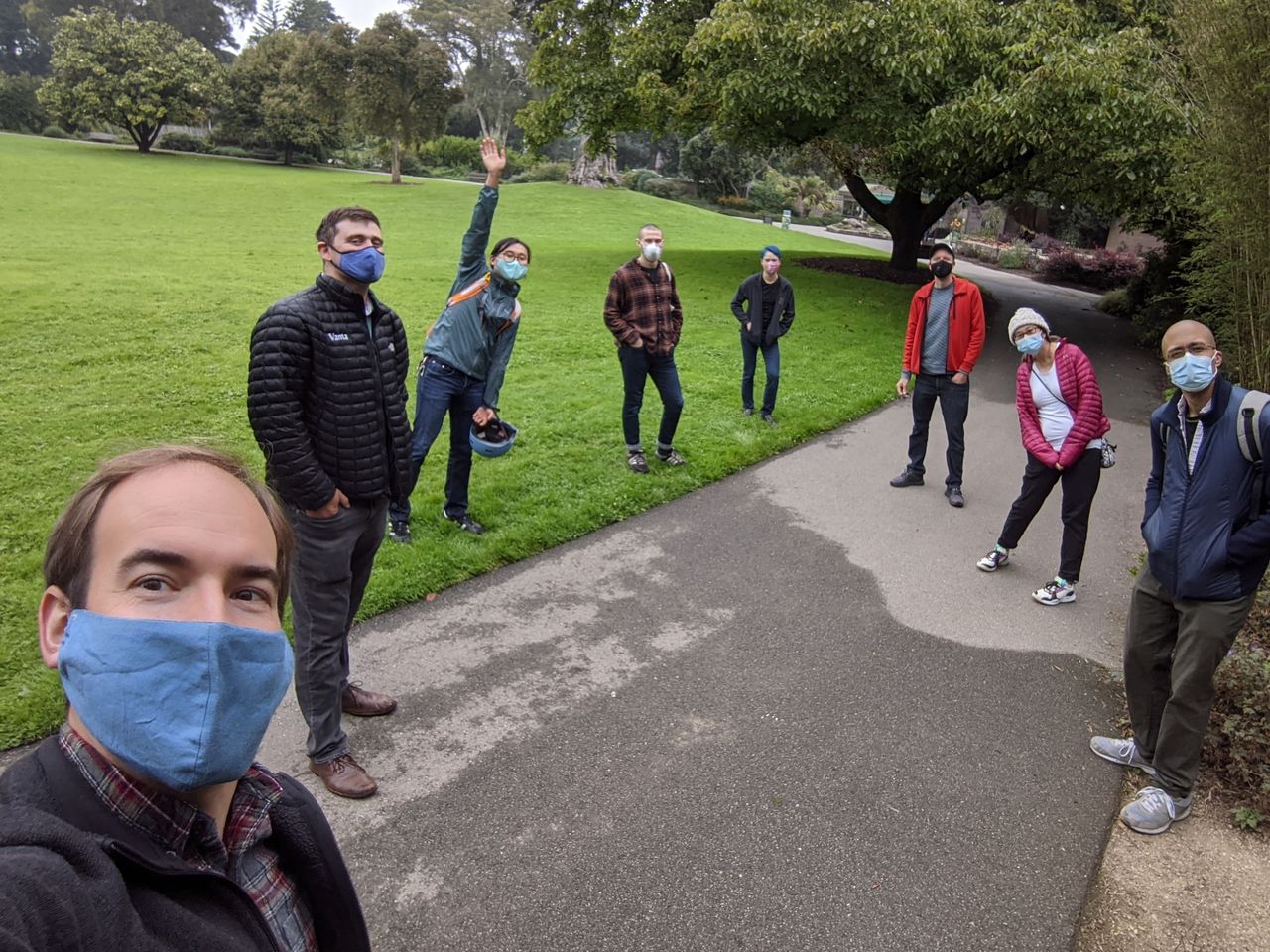 Vanta’s engineering team got together for a socially distanced picnic in Golden Gate Park in San Francisco in August. 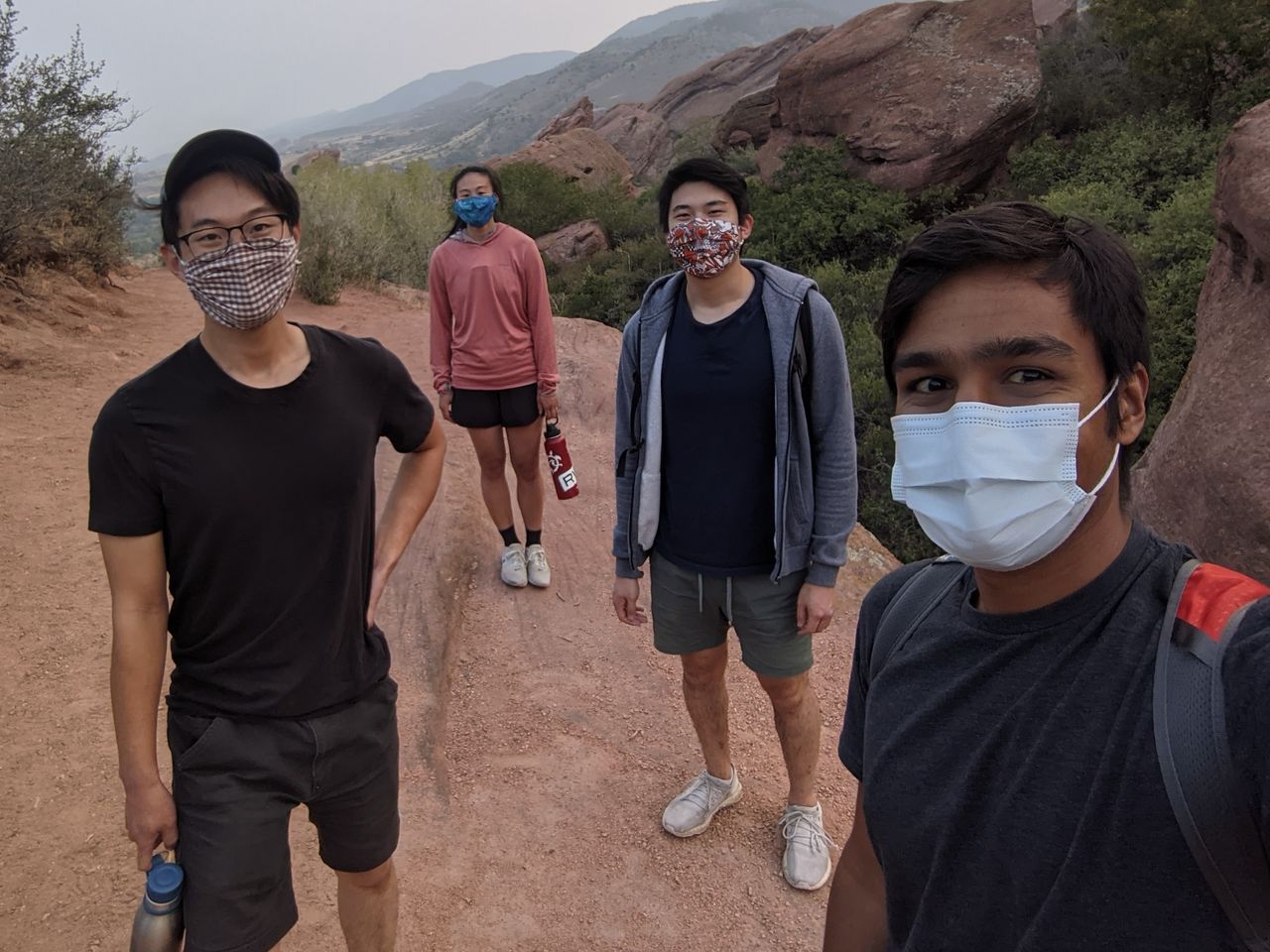 In October, four members of the Vanta team that were in Colorado organized a meet up.PHOTOS: VANTA(2)

“Problems got identified faster,” she said.

Ms. Cacioppo signed a new lease on office space in San Francisco’s Hayes Valley in January 2020 and has been paying rent on it ever since, but has yet to work from there. Now, her plan is to keep that office with about 45 full-time product and engineering employees while maintaining remote sales staff around the country.

Ian Hathaway, an executive at the seed accelerator Techstars and a senior fellow at the Brookings Institution who researches startup ecosystems, believes that any bullishness about going fully remote is skewed by pandemic circumstances.

“It seems like of course we’re going to build companies remotely from here on out, we’ve just gone through the simulation,” he said. “Does that mean we’ll keep doing it this way?” His guess is no, even if we see a lot more hybrid companies, and tech workers end up more distributed around the country than they were before.

He cited the longstanding benefits of co-location, including more innovation, easier collaboration and smoother fundraising, which he said requires relationship building. These factors led to decades of talent being concentrated in superstar cities, and might be a reason VC funding for early-stage startups is down right now.

“That force was so powerful that people were willing to live in places that were increasingly uninhabitable from a cost and congestion standpoint,” said Mr. Hathaway. “To say that just because we’ve been in this pandemic and we’ve tried this remote-working thing for a while that that is all completely undone, I just don’t buy it.”

Can You Repair An iPhone? Apple Says Yes, But To Varying Degrees
UK government to take stakes in tech start-ups

Searching is in progress